Poem of the Day by Vickie Johnstone 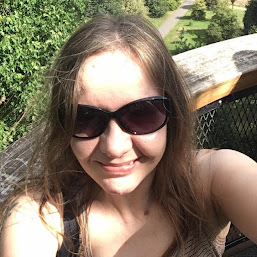 My mate Vickie has written a number of fiction books, ranging from children's stories to zombie horror!! She also does a poem a day on her blog. I have been badgering her for a while to let me feature her poems on my YouTube and now it's a new, hopefully regular feature on my channel.

Poem of the Day - Playlist 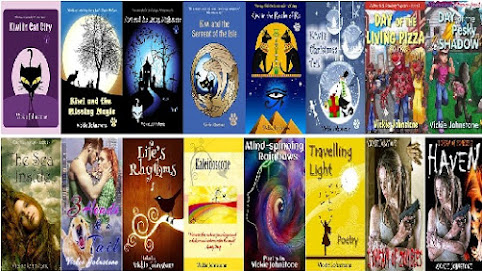 Vickie Johnstone lives in London, UK, and works as a freelance layout sub editor. Her first book, Kiwi in Cat City, was written in 2002 and self-published in 2011, and she has scribbled stories and poetry all her life. Vickie’s loves include cats, reading, films, travelling, rock music, Castle, The Walking Dead, tea, the sea, dancing like an eejit, sleeping and Milky Bar.
Vickie has written and self-published the following 15 books: Kaleidoscope (poetry); Travelling Light (poetry); Life’s Rhythms (haiku); 3 Heads and a Tail (comedy romance with a dog); Kiwi in Cat City (magical cat series for middle grade readers); Kiwi and the Missing Magic; Kiwi and the Living Nightmare; Kiwi and the Serpent of the Isle; Kiwi in the Realm of Ra; Kiwi’s Christmas Tail; Day of the Living Pizza (comedy detective series for young teens), Day of the Pesky Shadow, The Sea Inside (teen/YA fantasy), I Dream of Zombies and Haven (Zombies, book 2). The Kiwi Series has illustrations by Nikki McBroom.

This musty fetid fable was unearthed from House of Secrets #154, November 1978. With superb voice work by fellow YouTuber og spacebunzz.

The original Silver Age series ran as House of Secrets for 80 issues, from November/December 1956 to September/October 1966. It then returned after a 3 years hiatus as The House of Secrets with #81 in September 1969, with a new host Abel. He is the brother of Cain the host of The House of Mystery and is the 1st murder victim from the bible. He is immortal, although he does get regularly killed by his brother, he resurrects every time. 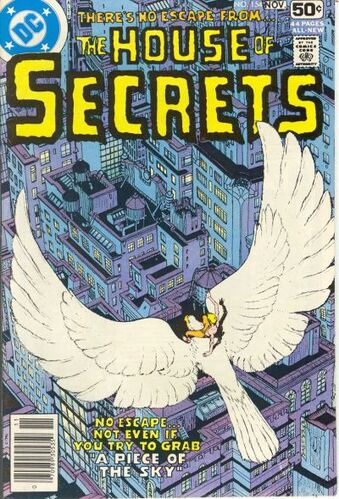 Tonight's tale is from Haunt of Fear 15, July/August 1950. All the voices and video were done by OverEasy Mode a fellow YouTube channel. Go sub him up.

The Haunt of Fear was an American bi-monthly horror comic anthology series published by EC Comics, starting in 1950. Along with Tales from the Crypt and The Vault of Horror, it formed a trifecta of popular EC horror anthologies. The Haunt of Fear was sold at newsstands beginning with its May/June 1950 issue. It ceased publication with its November/December 1954 issue, compiling a total of 28 issues. This story was dragged kicking and screaming from the pestilent pages of Weird Mystery #15, January 1975. This adaptation featured the voice talents of Werewolf by Lunchtime and his lovely wife Dee.
The title Weird Mystery Tales was first used for DC 100 Page Super Spectacular #4 in 1971. It reprinted stories from My Greatest Adventure #8, 12, 14, 15, and 20; Sensation Mystery #110 and 116; House of Secrets #2; The Phantom Stranger #1; Tales of the Unexpected #15 and 24; and House of Mystery #49.
The Weird Mystery Tales ongoing series was launched in July–August 1972 and was originally hosted by Destiny. The hosting role was gradually taken over by Eve, who fully assumed the title with issue #15 (December 1974–January 1975). The title's name was partially inspired by the sales success of Weird War Tales and Weird Western Tales. Early issues printed material by Jack Kirby that had been intended for his black-and-white, magazine-size DC comic series, Spirit World, which lasted only one issue. These stories featured Dr. E. Leopold Maas as host, sometimes with an appended hosting segment by Destiny.
Weird Mystery Tales contributors, in addition to Kirby, included Alfredo Alcala, Tony DeZuniga, Michael Kaluta, Alex Niño, Howard Purcell, Nestor Redondo, Jack Sparling, and Bernie Wrightson. Howard Purcell's last known work in the comics industry was a story each in Weird Mystery Tales #1–3 (Aug.–Dec. 1972), plus the cover of #2 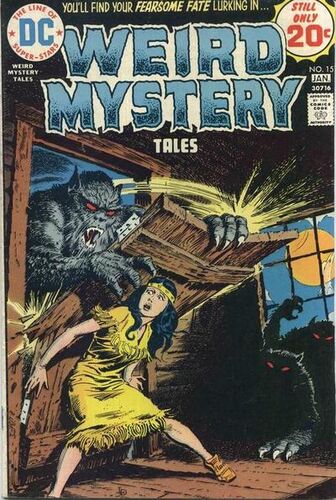 31 Nights of Halloween - Night 24 - The Shambler from the Stars

Journey into Mystery is an American comic book series initially published by Atlas Comics, then by its successor, Marvel Comics. Initially a horror comics anthology, it changed to giant-monster and science fiction stories in the late 1950s.

A second Journey into Mystery ran 19 issues (October 1972 – October 1975). The title was one of four launched by Marvel Comics editor-in-chief Roy Thomas to form a line of science fiction and horror anthologies with more thematic cohesiveness than the company's earlier attempts that decade, which had included the series Chamber of Darkness and Tower of Shadows. Whereas those titles generally presented original stories, these new books would instead adapt genre classics and other stories. With the four titles' debuts set to be staggered over the course of four months, Marvel premiered Journey into Mystery vol. 2 (October 1972), Chamber of Chills (Nov. 1972), Supernatural Thrillers (Dec. 1972), and, with a late start, Worlds Unknown (May 1973).

The first five issues of Journey into Mystery vol. 2 featured such adaptations as Robert E. Howard's "Dig Me No Grave", by writer Thomas and penciler Gil Kane, in issue #1; Robert Bloch's "Yours Truly, Jack the Ripper" by Thomas and Ron Goulart and penciler Kane, in #2; and H. P. Lovecraft's "The Haunter of the Dark" by Goulart and penciler Gene Colan, in addition to anthological horror stories by writers including George Alec Effinger, Steve Gerber, Steve Englehart, and Steve Skeates, and pencilers such as Billy Graham, Jim Starlin, Ralph Reese, and P. Craig Russell. Most issues also included a reprinted story from Marvel's 1950s predecessor, Atlas Comics. By issue #6, however, the magazine became a reprint title featuring science-fiction and giant-monster tales from the first Journey into Mystery series, as well as from the "pre-superhero Marvel" anthologies Amazing Adult Fantasy, Strange Tales, Strange Worlds, and Tales to Astonish. 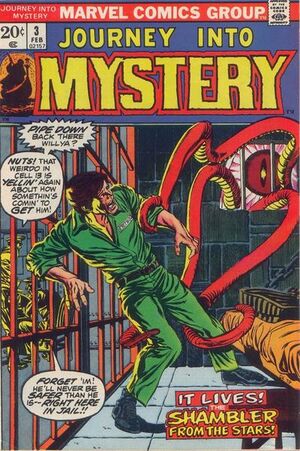 31 Nights of Halloween - Night 23 - The Haunter and The Haunted

This ghostly, ghastly gospel was grabbed from House of Secrets #126, December 1974.

The original Silver Age series ran as House of Secrets for 80 issues, from November/December 1956 to September/October 1966. It then returned after a 3 years hiatus as The House of Secrets with #81 in September 1969, with a new host Abel. He is the brother of Cain the host of The House of Mystery and is the 1st murder victim from the bible. He is immortal, although he does get regularly killed by his brother, he resurrects every time. 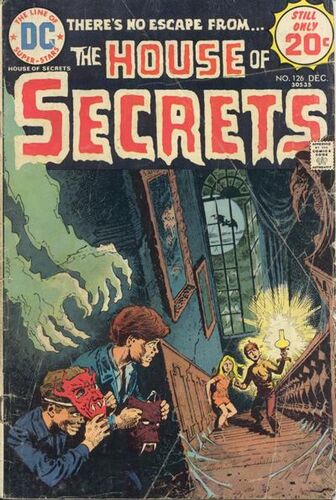 31 Nights of Halloween - Night 22 - The Spectral Shepherd of Dartmoor

This haunting horror is hacked from Ghosts #9, November 1972.

The comic was created by Leo Dorfman, who wrote all of the stories in the first issue. To avoid having it seem that a single writer was monopolizing the comic, editor Murray Boltinoff had Dorfman use the pseudonyms "Geoff Brown" (Dorfman's son was named "Geoff" and his wife's maiden name was "Brown") and "David George".

Ghosts was one of several horror-mystery-suspense DC Comics series launched in 1971, along with The Dark Mansion of Forbidden Love and The Sinister House of Secret Love. According to DC Comics writer and executive Paul Levitz, Ghosts "wasn’t a fan favourite (then or in retrospect), it was a disproportionately good seller." Nick Cardy was the cover artist for Ghosts for issues #1–6, 8–15, and 17–36.

Each issue of Ghosts carried multiple stories of the supernatural. The stories were prefaced by a short description introducing the premise and ended with a summation of how a mysterious justice was dealt to the evildoers of the tale. The first issue of this series carried the singular title Ghost in its indicia, but everywhere else, including advance promotional house ads and even on its own cover, it was the plural Ghosts, as even the indicia would read from #2 on. Limited Collectors' Edition #C–32 (Dec. 1974–Jan. 1975) reprinted stories from Ghosts #1, 3–6 and featured new material by Leo Dorfman and artists Gerry Talaoc, E. R. Cruz, and Frank Redondo.

Starting with issue #37 (April 1975), a new regular feature was added. At the front of each book a page of single panel depictions of alleged ghost sightings were listed in the fashion of Robert L. Ripley's Believe it or Not! features. These one-page introductory spreads were usually titled "Ghosts and the Supernatural." A Ghosts Special was published in December 1977 as part of the DC Special Series umbrella title. Ghosts #95 (Dec. 1980), introduced the series' first continuing-character feature, "Dr. 13 - The Ghost-Breaker." The character encounted the Spectre in a three-issue storyline. The "Dr. Thirteen" feature last appeared in #102 (July 1981).

For the most part, Ghosts was not "hosted" by a recurring character used in a framing sequence. In issue #104 (September–October 1981), however, Squire Shade was introduced as the title's host. He lasted in that position until the book was cancelled with issue #112 (May 1982). Poem of the Day by Vickie Johnstone

My mate Vickie has written a number of fiction books, ranging from children's stories to zombie horror!! She also does a poem a day on h...