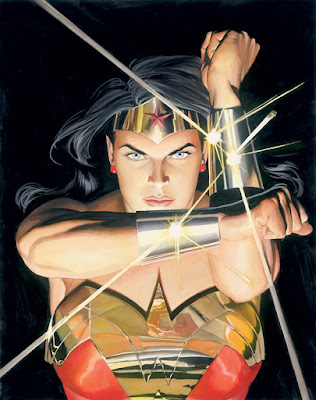 I have always been a fan of superheroes, from a young age I loved the colour and the art of the comic books and have bought and read thousands of them. I can remember the excitement when I'd pick up a new issue of The Flash or Spider-Man. I loved The Brave & The Bold, a team-up book starring Batman and a different super-friend every month. Doctor Fate was the 1st team-up I picked up and I love that character still today. 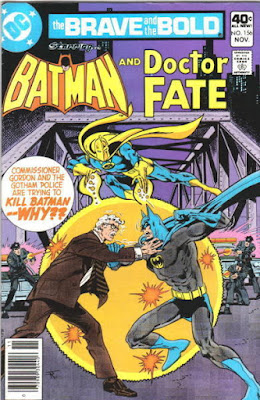 With all the books I bought the heroes were all men, as a male myself I suppose I wanted role models and fantasies that I could relate to. There were female heroes in some of the books, the X-Men had Jean Grey (Phoenix) and Storm for example and I recall The Wasp and The Scarlet Witch from The Avengers. I liked those characters for sure but there were very few female leading character comics around really and those I recall were mostly of the 'female version of a male hero' type. Like She-Hulk & Spider Woman for example. 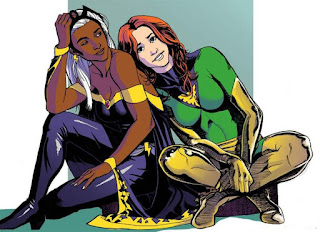 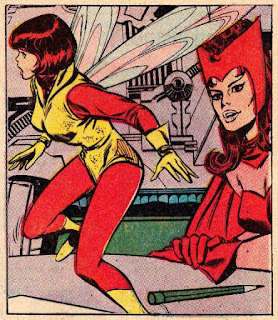 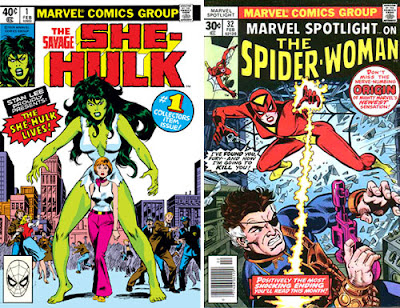 
Then in the 70's we had the Wonder Woman TV show! We loved that as kids, Lynda Carter played the character well, she was beautiful and vivacious, the action was exciting and a much younger me probably fell in love with her quite a bit. We'd do the spinning move and play at beating up the baddies, snaring them with our washing line 'Lasso of Truth' and flying in our invisible planes. The show ran for 3 seasons from 1975 - 1979. Every now and again I'd catch some of the old shows being repeated on a satellite channel or other and obviously seeing it as an older person you view it a lot differently. Much like the old Batman series of the 60's it is camp and a bit silly but it's still good innocent nostalgic fun. I have the old Batman series and enjoyed them on a whole different level when I re-watched them as an adult. The Wonder Woman series is available as individual series or all together on one box in various multi-disc versions. Certainly something I am considering adding to my Christmas gift list :)

A fun fact about Lynda Carter is that as well as contributing greatly to my entertainment as a child she has continued to contribute now in my adulthood as she does voice acting and singing, (playing the character Magnolia) on the video game Fallout 4 that I have been playing practically non-stop since it came out in 2015!!

I have just discovered that they made a pilot for a proposed 2011 Wonder Woman series too! I found a video that someone made on YouTube featuring clips from the pilot with the music of the 70's show added to it. This video has a lot of negative feedback on YouTube but I actually think it looks really good. I'd have watched this for sure, and that theme tune may be daft but it is fabulous!! :)
The actress playing Wonder Woman in this is Adrianne Palicki who actually played the heroine Mockingbird (Bobbi Morse) in the series Marvel's: Agents of S.H.I.E.L.D.

In comic books I never really bought that many Wonder Woman adventures though, I'd buy an issue if she was teaming up with one of my regular comic purchases or involved in a massive crossover event like Crisis or The Manhunters. The character was born in 1941, created by writer and psychologist William Moulton Marston, she has been a staple of DC Comics catalogue since then with only a brief hiatus in 1986. Steeped in tales of Greek Mythology, she is an Amazon, formed from clay and imbued with life by magic. Her character has seen a lot of changes over the 75 years she has been around and her current tales are getting great reviews, making me want to check out her saga. This 75 year anniversary box set special contains graphic novels from four monumental creators--Gail Simone, Brian Azzarello, George Pérez and Phil Jimenez--in a beautiful slipcase set it's perfect for new fans & collectors. It holds the following 4 much vaunted books, Wonder Woman Vol. 1: Gods and Mortals, Wonder Woman: Down to Earth, Wonder Woman: The Circle and Wonder Woman Vol. 1: Blood. This is another item I am adding to my Christmas wish list. Take note my loving relatives :)

It's a fun and slightly mind blowing fact that as well as creating the Lasso of Truth (sometimes called the Lasso of Hestia) for comic fiction, William Moulton Marston also created the systolic blood pressure test, which became one component of the modern polygraph (lie detector test) invented by John Augustus Larson in Berkeley, California.


As a long time superhero fan I absolutely LOVE the number of great comic book movies we are getting now. The production and special effects are AMAZING, really bringing the comic books to life. Marvel and DC comics are both very active in bringing their comic book creations to the big screen and I make sure that I buy every single one of them. I don't want the superhero tv show and movie craze to ever end. I remember the long, fallow years when all we had were terrible effects and poorly realised versions of the comics, produced on shoestring budgets. A superhero movie is a mega million dollar, blockbuster event now and I love them all! I am sure we all have our favourites, I loved the Green Lantern movie for example even though many did not! Give me a new Green Lantern over Dead Pool any day!! (I suppose I am biased though as I have read 100s of Green Lantern comics and practically no Dead Pool ones.) I may be alone with this thought but this summer opinion was pretty much unanimous that the Superfilm event of 2017 was the Wonder Woman movie. Starring Gal Gadot who 1st played the role in 2016 for the action packed Batman V Superman: Dawn of Justice.

In the film she reminisces on her 1st adventure into the world of man during the time of World War 1. Steve Trevor an American spy working with British Intelligence crash lands on the Amazon's secluded island Themyscira. Pursued by German soldiers a battle ensues between Amazons and Nazis after which Diana (Wonder Woman) is convinced that Ares the God of War is abroad in man's world and plans to confront him. It's a great action packed adventure with fight scenes that are truly 'wondrous'! I have a BIG superhero movie collection, I buy every box office hero movie when it comes to DVD and this one is definitely going in my collection.

Well I hope you enjoyed this blog giving you some of my thoughts and a few facts about the mighty Amazon warrior and Superhero Wonder Woman. If you are interested in the character and want to investigate her adventures in the comic books then you can seek out The Amazon on Amazon! Isn't that Amazong? Erm, I mean Amazing.... sorry I couldn't resist that terrible pun!! That could be my Supervillain name!! The Putrescent Pun-Master!!!

The Amazon on Amazon

Great write up mate.
Growing up didnt read much cos well i couldnt lol so the british comics. Dandy etch were my go to comics. I did venture out at some point to dr strange though sadly dont remember the comics.
Now onto wonder women. Loved the show growing up didnt kmow i was in love at the time.
Oh linda carter mmmmmm.but Gal just rocks the role in the upto date version One could even go so far to say she was born for the roll.if i had any compmants about the movie it was the bad guys neither stood out with minus that fecking tash.yes god of war your tash lol.
Paul lodm

Who doesn't like a nice beer every now and again? I indulge in the odd glass of tipple that's for sure and I thought I'd make a ... 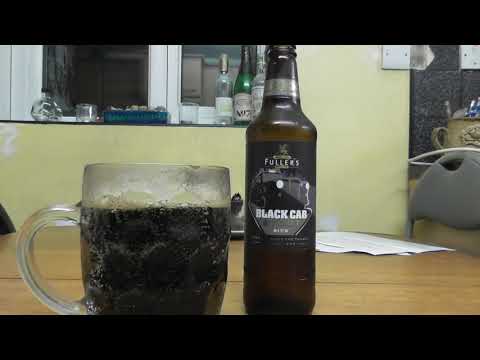